Mr. Trivett's illness was of sudden development as he was at business within a day or two of his death.

Mr. Trivett who was born at Mansfield on 26th. August, 1864 was educated at schools at Nottingham and at Hamburg As a young man he entered the tea trade, and ultimately set up in business for himself and his firm became one of the best known in the local market. Some years ago he turned his firm into a limited liability company, of which he was chairman and managing director.

More than a quarter of a century ago be became interested in local government was made an alderman in May 1926, and was a member of the Education, Finance and Public Assistance Committees of Nottingham. Mr. Trivett was also a prominent Freemason occupying the chair of his Lodge in 1901.

As regards his hobbies, Mr. Trivett was a keen Stamp Collector, was the Hon. President of the Nottinghamshire Philatelic Society, a Fellow of the Royal Philatelic Society, London, and a Life member of the Jamaica Philatelic Society. He possessed a wonderful collection of the stamps of Great Britain. Disposing of this valuable collection some years ago, at auction, Mr. Trivett took up Jamaica and Gibraltar and speedily gathered together a fine array of the postage stamps of these countries. His G.B. stamps, on covers, used in Jamaica were a remarkable lot.

Mr. Trivett was a regular attendant at Congress, and his cheery presence will be much missed. He also presented a Cup for the best paper submitted to the Philatelic Congress of Great Britain on the subject of "Specialism: its field, its aims, its dangers."

Another of his hobbies was the growing of orchids. and he was rarely to be seen without on orchid in his button bole, and when the Philatelic Congress visited Nottingham in 1927, he supplied many of the delegates and their ladies attending the Congress Banquet with an orchid of his culture.

Probably the chief interest in his life was the Boy Scout Movement. He threw himself into a number of interests concerned with the Social welfare of Nottingham, and none attracted him more than that. His interest fell to his appointment as Assistant County Commissioner. He attended the international jamboree at Olympia in 1920 and had the honour to conduct Princess Mary and other members of the Royal Family around the philatelic display.

At Nottingham, Spin Hall on 7th January 1933 Colonel P. R. Clifton, the presiding Magistrate stated:-- "I have had singular opportunities of being associated with Alderman Trivett in the Boy Scout Movement, to which he gave - as he gave to everything he pursued - the whole of his heart mind, and intelligence. I am sure you will be of the opinion that the county and Bench will be the poorer by his passing."

Mr. Trivett had been twice married, and by his second wife he had two children. His son, Mr. Lester Trivett is associated with his father's business, and his daughter married Mr. Ernest Pendleton, a, son of the late A. W. Pendleton.. 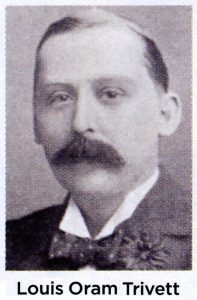