Earlier this year, our British Caribbean Philatelic Study Group passed a milestone of some significance upon completion of its tenth year. Our participation in the NOJEX stamp exhibition which will be taking place as this Journal is in the mails, celebrates these ten years of existence. During them the BCPSG has grown to where it is now recognized as a foremost specialty society by the philatelic world.

The founding of a new philatelic organization is no simple task. Philatelists are not Drone to join a society unless thev are convinced that doing so will help them further their collecting interests. Thus when Bob Topaz concluded that none of the existing societies met his need for means of direct contact with others sharing his interest in the British Caribbean, he was faced with the job of showing others with similar interests that it would be a good idea to organize a new society, patterned to meet that requirement.

Fortunately, Bob had enough enthusiasm to take positive action. With the help of a few others who shared his philosophy, Bob launched a drive to recruit others, and a letter was mailed on 10th April 1961 to a number of those known to be interested in BWI philately. The response was good and inside of three months some 70 had joined the new organization. As chief founder, Bob served as Acting President during the first year and was elected to that office in 1962.

New societies often founder after a short life when the initial enthusiasm of their organizing davs has Dassed. but thanks to Bob's leadership and the very able help he received from Reg Lant as the Secretary and Treasurer and Al Johnson as Editor of the Journal, the new society was able to maintain strong growth and member-interest. Bob found time to act as Group Leader for Jamaica, and his Jamaica Jottings column became a popular Journal feature. He also worked up postmark studies with help from some of the members, and these were published as supplements to the Journal. By the end of 1962 when the late Russell A. Gibson relieved Bob as President, the Group numbered 102.

Again in 1965 and 1966, Bob served as President, with the Group continuing to grow both in number of members and activity. When he left office this time, there were 180 members, and the Treasury enjoyed a comfortable balance.

In recent years, Bob's employment has placed increased demands on his time, and he has had little of that commodity to spend on other activities. However, he hasn't stopped serving the Group. While his Jamaica Jottings column now appears somewhat less frequently, Bob expends considerable time and effort conducting our auctions. As we celebrate our Tenth Anniversary, we offer a salute to Bob Topaz. We feel we can best show him our appreciation by assuring that the BCPSG continues its growth and progress through another decade, and we'll do our best.

ROBERT TOPAZ, residing in Waban, Massachusetts, was born and brought up in the Boston area. Bob attended Tufts University and has worked most of his adult life for a large shoe company of which he is now president. He collects postal history items of the BWI, specializing in Jamaica, British Honduras, and Grenada. Bob was the founder and first president of the BCPSG, also serving as president in 1965 and 1966. His "Jamaica Jottings" column appears from time to time in the BCPJ and he serves the Group as auction manager. Bob enjoys membership in numerous philatelic societies. 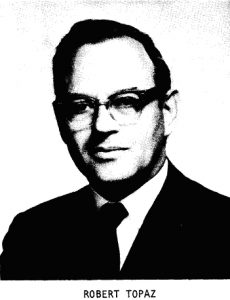